“We use WordPress as a flexible platform – it’s a CMS that we adapt to a whole bunch of needs,” – Sean Herron, Technology Strategist, NASA.

“We’re dedicated to making it easier for citizens to interact with NASA and engage in what NASA is doing; to understand our mission and all the programs we have, and to leverage government data and technology in novel ways,” said Nicholas Skytland, Program Manager for NASA’s Open Government Initiative.

To accomplish this mission, NASA’s Open Government Initiative team hosts a series of related websites, many of which are powered by the Open Source WordPress Content Management System.

“Open Source is a core part of the agency’s Open Government Plan and we knew we wanted to base our site off of open source technology.” – Sean Herron, a NASA contractor and Technology Strategist on the NASA Open Government team. “We use WordPress as a flexible platform – it’s a CMS that we adapt to a whole bunch of needs.” 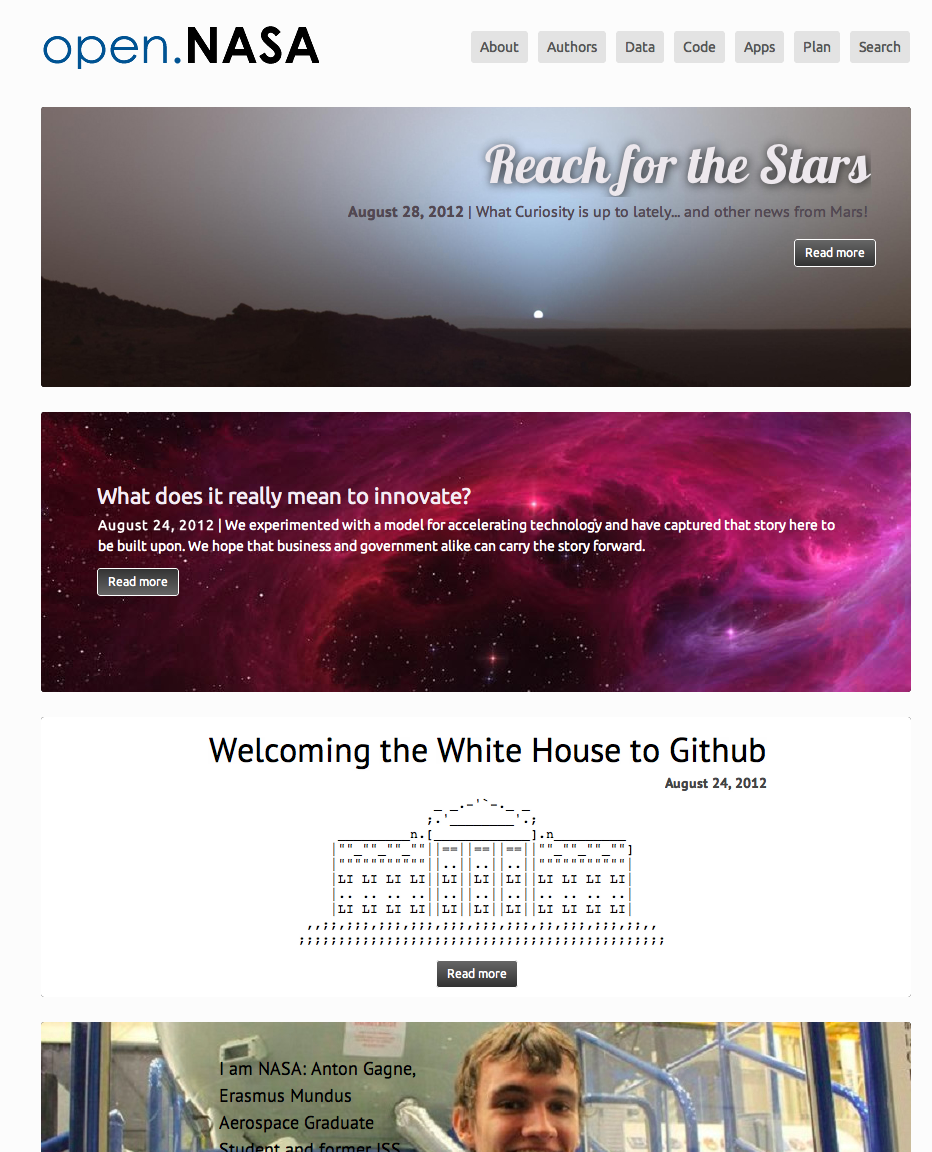 To increase transparency, NASA’s Open Government team launched their first WordPress site, open.NASA.gov in July 2011, as a collaborative platform to share success stories and projects they are working on.  The content on the site is written by NASA employees and contractors across the agency.

NASA integrated WordPress with their Active Directory so that any of the 18,000 people working for NASA are now automatically enabled as potential authors for the site.

“A large portion of the people who go to our site to write a blog post have already used WordPress in some way,” said Ali Llewellyn, a NASA contractor and community manager on the Open Government team.

“WordPress allows me to invite users from across the agency to submit their content in a fairly easy interface. I am constantly trying to enable non-technical personnel to contribute to our team’s blog, and they can actually figure it out in WordPress,” said Ali Llewellyn.

On the administration side, the small team at NASA in charge of managing the WordPress sites utilizes WordPress Multisite so they can easily administer their sites in a central location and with standardized monitoring and analytics tools.

“[WordPress Multisite] allows us to work easily within our various websites and keep them consistent and connected. We frequently use the site stats features, tracking the links clicked, referrals, and other metrics to keep updated on what people looking for when they visit NASA,” added Llewellyn. 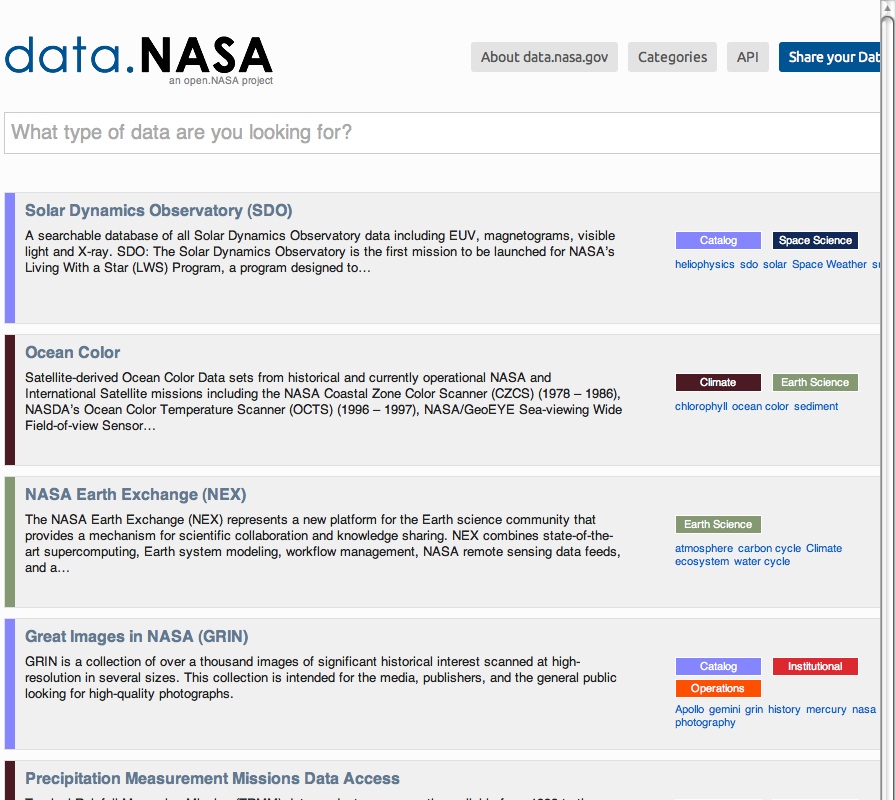 data.NASA.gov, another site NASA launched using WordPress, is a searchable index of the data sets NASA has released to the public. There are more than 1200 individual datasets via 45 posts in the index, which have added metadata through WordPress custom fields, and these datasets are also accessible via the JSON API so that the public can access the data in a machine-readable format.

“Having all this code available and shared by the rest of the WordPress community makes it easier for us to work on the site…it would have taken a lot longer, and cost much more, if we had had to code it all ourselves.” – Sean Herron, Technology Strategist, NASA.

Submissions of data come from inside NASA, as well as from the general public, which are published after being moderated. “Our policy is to open our platforms as much as we can – on open.NASA.gov it means any NASA employee can be a contributor, on data.NASA.gov it means anyone in the world can submit a dataset,” said Skytland.

NASA’s data is spread over thousands of servers and FTP sites all over the Internet, making it very difficult for the public to access and reuse the data as a resource. There was not a comprehensive list available to the public. Data.nasa.gov was designed to bring together a listing of these datasets to help the public better understand and use NASA’s data.

“Since launching the site NASA has seen a huge increase in people searching for the data, and it’s an important resource for developers, scientists, and students,” said Herron. “NASA’s data search isn’t just helping the scientists and students of the world, it’s helping entrepreneurs and application developers, too. Many developers of mobile applications are gathering their data directly from NASA,” Herron added.

code.NASA.gov: Sharing code with the public and other agencies 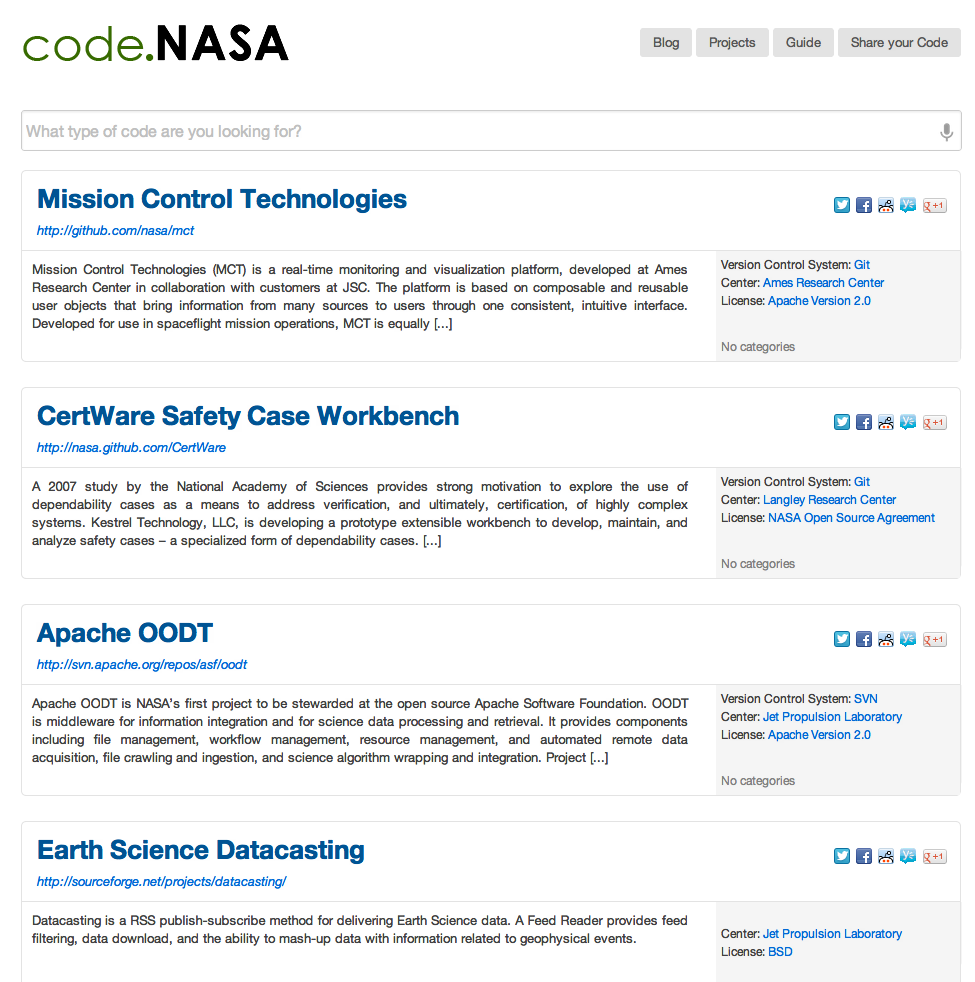 Launched in January 2012, code.NASA.gov is a WordPress-powered hub for all the open source code and processes NASA will release to the public.

“The site will serve to surface existing projects, provide a forum for discussing projects and processes, and guide internal and external groups in open development, release, and contribution,” said William Eshagh, a NASA contractor and member of NASA’s Open Government team, in a blog post about the launch.

In addition to the code released, perhaps even more useful will be the information NASA releases about the licensing and processes they use for releasing code so it will have value both internally and to the public.

“We’ve made some progress in championing the use of open source software and we really want to make it easier for people in NASA to release open source applications. One of the biggest challenges with the government releasing open source code or plugins is making sure the code released isn’t proprietary or insecure in some way. We’re working on creating a process of all the steps and checks involved in releasing code for open source purposes so this can be done faster and more securely, and we hope that other agencies will build upon these processes just like they can with our code,” said Skytland.

NASA is hoping to encourage other federal agencies to embrace open source technologies and is working with several agencies on understanding how APIs can be utilized to enable the public to interact with their data in a more useful way. NASA also wants to become more active in developer communities, and they are already making some code available on Github, the Social Coding site, as well as aiming to release code back to the WordPress community.

“Our goal is to release the work we’ve done with WordPress to the open source community as well, including themes, plugins, our metadata collector and scripter, and customizations to the API, and in the future this code will live at code.NASA.gov. We’re really interested in fostering a two-way communication where members of the public and developers can contribute to the work that we’re doing in a bi-directional manner,” said Herron.

Though all of their sites have different scopes and content, NASA’s Open Government Team uses a single WordPress backend to power them. “We use WordPress as a flexible platform – it’s a CMS that we adapt to a whole bunch of needs. We have the same platform and interface for all of our sites and we drive the backend through WordPress Mulitsite so it has a single administration panel,” said Herron.

99% of the code used in the NASA WordPress sites was already available via the WordPress Codex or via plugins on the WordPress.org plugin repository. This allowed a small development team to save the Agency thousands of dollars on development costs while still supporting several sites. “Having all this code available and shared by the rest of the WordPress community makes it easier for us to work on the site as only 20% of our jobs – it would have taken a lot longer, and cost much more, if we had had to code it all ourselves,” said Herron.