A Behind The Scenes Look at Atlantic Media’s Quartz

The site had been in the works for about a year prior to that and development started in earnest over the summer, a rather short window. The Quartz team agreed pretty quickly that they didn’t want a custom-built CMS and the problems that come with it, and instead felt like WordPress was the best CMS that suited their needs.

We spoke with Josh Kadis, Web Applications Technologist at Quartz, about the site and its incarnation on WordPress. 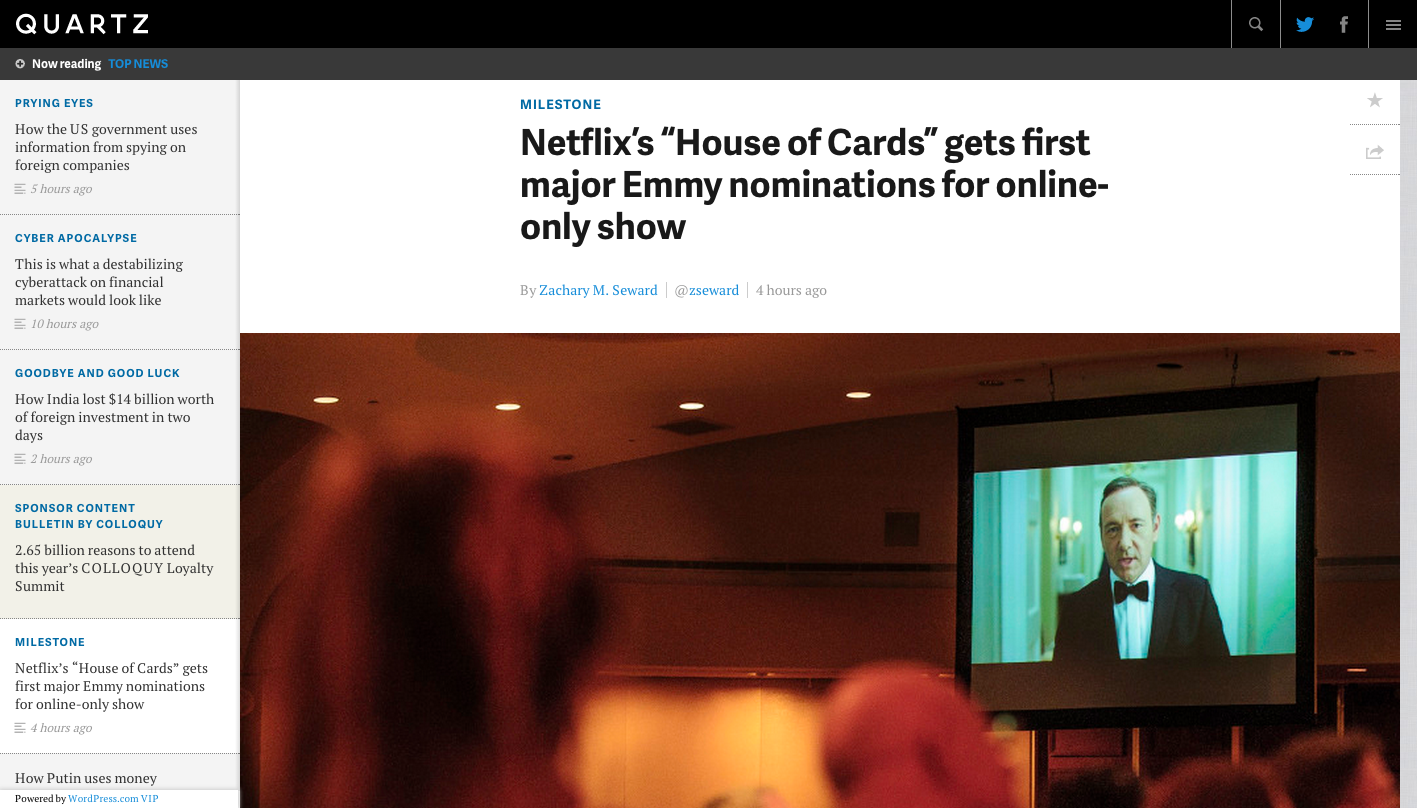 It’s safe to say the launch of QZ.com changed the way most people thought of what a news site looks like. Can you tell us what motivated the beautiful design?

The design was a result of wanting to have the feel of a native app but also accessible on the web and having content sharable and accessible by any device with a screen. Atlantic Media Company has had a lot of success with their digital properties not behind a paywall (like TheAtlantic.com) and that helped shape the feel of the site.

“By working with WordPress.com VIP, it helps us in the long run by having a smaller and more nimble team.” — Josh Kadis, Web Applications Technologist at Quartz.

The design is liked by both readers and interestingly enough, advertisers – the ads on QZ.com look so part of the content that the experience is overall more interactive and enjoyable for both users and advertisers. How much work goes into preparing each ad to be a mini-app?

This was a deliberate decision on our part to emphasize not only interactive ads but ones which would translate to any platform. In the beginning some advertisers didn’t have HTML versions and our team worked with them on new creative so they would be responsive and interactive and work on tablets as well as the web. We’re in a position where we’re fortunate enough to form relationships with our advertisers to assist on the creative side if necessary, and it’s also better for the user if you can make that experience more interactive and useful. Our advertisers have responded positively because they see it makes a stronger impact. Users like it because it’s not just the traditional advertising they’re used to.

The Top News on the left side of your site are fixed and constantly present. How are those News powered?

The Top News, which is the initial ordering of the articles in the sidebar, is set by our editorial staff manually during the day. This was one of the first things we worked on in the wp-admin via a plugin so they could be independent in reordering and drag & drop. To help determine what goes there, they use real-time stats through Chartbeat to see what’s resonating with readers and what’s trending, as well as their editorial calendar & what’s been recently posted or what they might want to give a bump to.

There’s a human element in every choice for how it gets ordered, just like our list of Obsessions. All of that is done in WordPress using the plugin we created which involves drag & drop and custom metadata.

Has Quartz been successful? Have readers reacted positively to the site?

The site reached a new traffic high with over five million unique visitors (Omniture) for the month of July 2013. Quartz launched in the fall of 2012 and has seen steady growth for the last six with 40% of readers coming from outside the US including Canada, the UK, India, Australia, and Germany among the top geographies.

In terms of user feedback, it was hard to separate the feedback which was plentiful and useful when reconciling new vs. known problems we were already working on. Over time we worked on the main bugs which affected everyone and then we made a lot of changes to improve navigation on mobile first and then those affecting the rest of the devices. The main things we focused on were determining which items were at the top of the header and how to navigate content.

QZ.com is hosted on WordPress.com VIP Cloud Hosting. How has that experience changed the way your team does business?

“WordPress and WordPress.com VIP is clearly the best option for us.” — Josh Kadis, Web Applications Technologist at Quartz.

If we weren’t on WordPress.com VIP, we would need to have a bigger team supporting the site, and that would definitely slow us down. WordPress.com VIP reviews our code for security and scaling and then deploys it, and while it means we don’t deploy our own code, the time it takes for reviews and deploying in aggregate is a lot less than the communication friction and development lags that occur with a bigger development team.

If we didn’t have WordPress.com VIP taking care of the platform side of things, we’d have to have someone manage servers and handle a lot of the automated tasks that VIP handles for us as well. By working with WordPress.com VIP, it helps us in the long run by having a smaller and more nimble team, even if our workflow would be different self-hosted – it’s worth it.

Internally, WordPress and WordPress.com VIP is clearly the best option for us. There have been some creative workarounds but that’s part of developing on any platform.

How important is the mobile experience for Quartz?

Mobile is an area we look to growing for sure. Right now, and I think any publisher will find this to be true, larger screens make up more of the traffic. There’s a lot of things we’ve done which are specific to mobile in terms of layout and functionality.

We’ve worked really hard on an offline mode for readers who could, for example, read something on the subway even when they lose their internet connection. We want to be out ahead of the mobile experience – we’re not letting it lead us. We want to be thoughtful how we build to accommodate mobile and what we think will be a big source of growth in our numbers.

How do users interact with your content on social channels?

Our approach to social is more editorial than algorithmic. We’ll approach “social” by looking at it – in the extent you can approach something so varied and encapsulated in that one word – from a human writers’ solution, rather than a machine’s with suggested keywords or something else that’s search engine-related.

We look at a headline to see if it’s short enough to be shared in Twitter with a link, and if this is something people would be interested in clicking on if they see it in their Twitter feed.

Our editorial team will also see what’s being shared on social channels to also capture what’s trending for us at the moment with the Top News. We approach it really by leaving the writers and editors in there to do their thing.

Speaking of your editorial team, what do they love about WordPress? Which features do they  use the most?

The editorial team uses a mix of the custom features and the VIP plugins we’ve activated, like Edit Flow (an editorial workflow plugin for WordPress), which is an indispensable tool – it’s used by editors on a daily basis. In Edit Flow they especially like the custom statuses, which allow the team to extend beyond the traditional Draft – Pending Review – Published statuses, to better reflect the editorial workflow we use. They also use the Editorial Comments feature of Edit Flow which allows editorial comments about a certain article to be associated with and tracked privately via the WordPress admin interface.

We’ve also added some custom plugins which make authoring a little more efficient like one which will look up ticker symbols so they can be inserted, or insert as a google news sitemap. These save time for everyone multiple times a day.

We also send a Daily Brief newsletter through Mailchimp, and it runs through a custom post type with WordPress, and it also allows us to save advertising and editorial folks a bunch of time as it keeps the advertising separate from the editorial process.

A lot of people on the Quartz team came from other organizations with custom CMS, and the speed with which we can introduce new features on WordPress is something a lot of people have commented on.

What’s next for Quartz?

Starting from launch, we’ve had the ability to create a user account on QZ.com. But to be honest, this was a pretty underdeveloped aspect of the site and there wasn’t much you could do other than subscribe to the Daily Brief. So now we’re putting more of an emphasis on personalization and interaction with the editorial staff and other readers Quartz. A big feature which just rolled out is Annotations, which allow discussion at the level of individual paragraphs within an article. We’d looking at more user-facing improvements like that.