“You Are Not So Smart” Powered by WordPress.com

The following interview is with David McRaney, creator of the WordPress.com blog You Are Not So Smart, and author of the recently published You Are Not So Smart: Why You Have Too Many Friends on Facebook, Why Your Memory Is Mostly Fiction, and 46 Other Ways You’re Deluding Yourself.

1. Tell us what your blog and book are about. 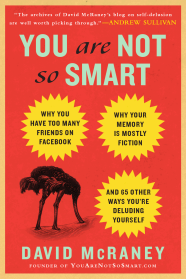 DAVID: You Are Not So Smart is a celebration of self delusion. One topic at a time, it explores how silly and irrational we all are through the lens of fascinating psychological studies. It started out as a blog just pointing out interesting things around that theme, but once I started gaining fans and saw my hits growing, I made the effort to write longer, more in-depth pieces about cognitive biases and other fun things. The book is an expanded version of the blog, similar in format.

2. What encouraged you to create a blog that celebrates self delusion? How has your life changed as a result of learning so much about psychology and irrational thinking?

DAVID: I tried a lot of different blog ideas before You Are Not So Smart. My first real attempt at keeping a blog about interesting things in psychology and neuroscience began around 2003. I gave up on that a few years later and tried a blog about feature writing. It wasn’t until I saw a video demonstration of inattentional blindness that blew my mind and prompted me to launch You Are Not So Smart in late 2009.

The result of writing about self-delusion all the time? It’s been great. My wife and I are always saying things like, “Hold on, that’s just the anchoring effect,” or “I think you are confabulating right now.” We’ve found that the articles can be a vehicle for self improvement, but always when you least expect it. Also, I don’t argue online anymore because I’ve learned through the research how futile and fruitless it is. It’s a wonderful thing to delete from your life. 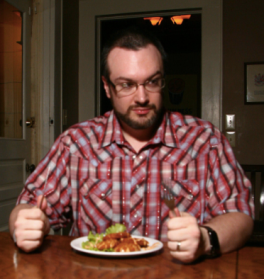 DAVID: I got into a heated online argument with two friends over which was better, the PS3 or the Xbox 360. The argument went on for days, and I think we all crossed the line, insulting each other and getting legitimately angry – and we’re friends in real life! I thought it would make a great blog post, so I researched why I was so brand loyal and silly.

That became my post on brand loyalty and fanboyism, which I published that post at about the same time an iPhone prototype was stolen. With the buzz around fanboyism at an all-time high, someone at Gizmodo saw my post and asked if they could republish it with links back. I agreed, and all of a sudden my hits went through the roof. I kept writing and posting and soon emails arrived from the publishing world asking if I was interested in turning the blog into a book. I said hell yes.

4. Why did you choose WordPress.com, and what do you like most about it?

DAVID: I’ve tried every other service out there, but WordPress.com is the most robust. I wanted something clean and elegant and easy, but with enough features to allow for scaling up my blog if it ever caught on with a larger audience. It was the right move.

This is an amazing and revolutionary time for writers. The barriers to entry are so low, and the platforms like WordPress.com so well-made, anyone with a voice can start shouting and be heard. Instead of writing a book and hoping a publisher won’t throw it into the slush pile, writers can start a blog and build a fan base. They can prove to publishers there is a market for their work and their voice.

A generation ago, a writer like me would never be discovered, never get a shot at the big time. Blogging platforms like WordPress.com are changing the lives of all manner of artists and activists. I think that’s fantastic.